If It Looks Like a Cactus, It May Not Be One 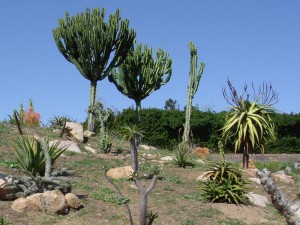 Photo of Succulents – No Cactus Here!

Written by Daiv Freeman, a friend and cactus expert.

It is said all that glitters is not gold. It can also be said that all
that’s sharp is not a cactus. These statements seem obvious, but we can take it one step further and say that all plants that are succulent and covered in thorns or prickles are not all cactus either. After all, we know that rose bushes have prickles, but we don’t confuse them for cactus.. Even so, there are many plants that get mistakenly referred to as cactus plants that are just as distant from a true cactus as is a rose bush.

This article will  examine the common factors which lead to this error, and discuss the unique features of cactus that will help us avoid errors. As mentioned above, every “spiky” plant is not a cactus. In my experience, there are two other main factors, in addition to the presence of spines or thorns which lead to this mistaken identity.

One factor is succulence – meaning plants with thickened stem or leaf tissue used for storing water. The other has to do with the plant’s location, specifically those that live in a desert setting. Of these three factors – “spikes”, succulence, and habitat -succulence contributes to the most misidentification, followed by “spikes”, and finally desert habitat. When any of  these factors are combined, such as both succulent and living in the desert – or even all three factors – then the chances that a plant will be considered a “cactus” increases dramatically!

If you’re following me so far, you’ll see that a plant that is succulent, has “spikes”, and lives in a desert is not necessarily a cactus. If you came to this conclusion, you are absolutely right! Just as a rose has “spikes”, but isn’t a cactus, so there are succulent plants with “spikes” that live in deserts that are not cacti either. Next, let’s consider these categories and the type of plants that might fit into them but are also not cactus.

Most plants that grow in the desert have “spikes” to protect them or succulence to survive. For this reason there aren’t many opportunities to make the error of calling a plant a cactus simply because it lives in the desert. Some Bromeliads might fit this description, however, their habitat isn’t quite the stereotypical desert, they don’t have “spikes” and are not “succulent”. I have had people ask about a “cactus”, which turned out to be a Bromeliad.

Similarly, some “spiky” plants such as thistles have been mistaken for cactus even though they are not succulent and do not grow in the desert. Some “spiky” plants that do grow in the desert that are often confused for cactus are  – Agave, Yucca, and Fouquieria. Likewise, there are succulent desert plants such as Echiveria, Dudleya, and Lithops and although these plants are not all strictly desert dwellers, many are still mistakenly called cactus due to their succulent stems or leaves.

Now if we take all three factors, we find one non-cactus plant that fits this situation better than those in the genus  Euphorbia. Several species in this genus look so much like a “cactus”, that only an experienced grower can spot the difference without much scrutiny!  I’ve listed just a few of the possible impostors here, and there are many others.

As you see there are many different plants that share characteristics with cactus, but are not actually cactus plants. That leaves us begging the question, “What then makes a plant a cactus?” First lets consider our three factors above. All cacti have succulent stems (or in a few cases leaves), but not all species live in the desert and not all species are “spiky”. It makes sense then, that succulence is the most prominent factor in misidentifications.

Yet, even in combination, we’ve already established that these factors do not uniquely distinguish a cactus. 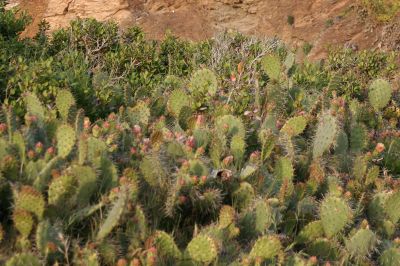 The structure that all cactus have that no other plant share is the areole. Areoles are a specialized structures on the stem of a cactus out of which the flowers, spines, and new stem segments are grown. Most of the times they just look like white dots along the stem,  which are often fuzzy.

Again, not all cactus have spines present, but those that do have them will have them sticking out of an areole. You may have noticed that every time I mentioned the word “spiky” above, I put it in quotes.

This is because, like areoles, spines are also unique to cactus so I could not use the term spines for a general description of various plants and cacti do not have thorns. A close look at other “spiky” plants will reveal that the thorns are contiguous with the stem or branch they are attached to unlike the cactus with a spine or spines sticking out of an areole.

This sounds like a sure fire way to ID any cactus plant as a cactus, but in some species, the areoles are very hard to notice. This is especially true in epiphytic “jungle” cacti that grow hanging from trees in rain-forests -most people are familiar with at least one cactus of this type, the Christmas Cactus.

Finally, even armed with this information, it won’t be immediately apparent to the beginner which succulent, “spiky” plant is a cactus and which is one of the others we mentioned. However, just knowing that there is a difference will give you a big advantage.

Many people have e-mailed me saying that they had searched through hundreds of images, but just couldn’t find a match for their plant. When I inform them that their plant isn’t even a cactus, it comes as a big surprise to them. So the next time you are on a quest for a succulent that you think is a cactus, take a moment to first make certain it actually is a cactus!